Alan Hoverd and Colin Berry (BUD WN)) and Neisha Brooking (TAU WB) recently returned from the Kodokan Summer Kata Course in Tokyo attended by over 300 participants, three quarters of whom were from overseas.

The following report was submitted by Alan.

The annual event, traditionally run over eight days, was, this year, reduced to six, consequently some of the seven Kata were taught concurrently. This meant one had to choose one or other from the two offered that day or alternatively, attend one session in the morning and the other in the afternoon. It was very well run with plenty of senior Kodokan instructors on hand to assist and give help when needed.

The opening, as is a Kodokan tradition, was a fairly formal affair and was followed by a lecture and demonstration of Kappo, while the afternoon was devoted to doing Isutsu no Kata, a pleasant introduction before a busy week on the tatami.

Being summer, some of the smaller Dojos were anywhere between 30 – 34oC with 60 - 65 % humidity! The importance of regular hydration breaks was stressed. For those of you who have trained in the Main Dojo in the past, you will be pleased to know that it is now airconditioned as part of the upgrade leading up to the Olympic Games next year.

The banquet, for both participants and instructors, was a very casual affair and each country represented was expected to get up and sing a song. We chose a Maori waiata, Te Aroha, which was very well received especially by the Japanese and we were pleasantly surprised to get positive feedback from the latter during the rest of our time at the Kodokan.

The senior instructors, in particular Motonari SAMESHIMA (8th Dan), Director of Education and Instruction Department at the Kodokan (who we have met several times when attending previous Summer Courses in Melbourne and Sydney, Australia) appreciated our attendance. He and others really liked our New Zealand embroidered fern on Alan’s jacket.

It was encouraging to find that our proficiency in the kata was such that only small modifications were required to improve and update our understanding and execution. It was a good opportunity to catch up with fellow players from Australia and elsewhere who we had competed against, with and/or met before.

If you are thinking of attending next year or in the future, put it on your “bucket list” it’s a must for any aspiring kata player, you will learn more in a week, at the Kodokan, than you will learn in a lifetime staying here! 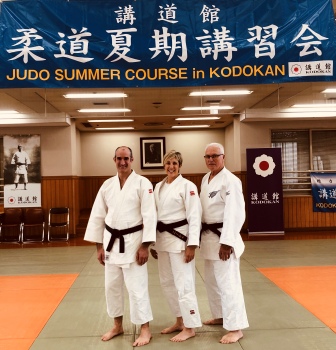